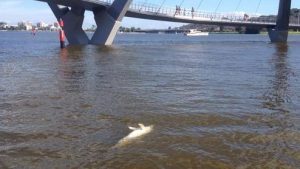 The pollutants in question, perfluorinated compounds (PFCs), have been linked to cancer and are restricted in most countries, and across several Australian states.

This finding came mere days after the ex Premier Colin Barnett declared the Swan River was in good health.

The documents that have now been brought to the public’s attention also reveal Perth’s aquifers, which supply more than half of the city with drinking water, may also be contaminated with PFCs, a fact that the Premier has been aware of since June last year.

PFCs are man-made compounds that have been used in manufacturing for several decades. They’re commonly found in fire extinguishers and non-stick cookware because of their resistance to heat, water and oil, and don’t degrade naturally in the environment.

The long-lived compounds have been banned or restricted across a number of countries and states amid fears they contain carcinogenic properties.

Tissue samples of the dead dolphins were sent to South Australia last year after an official inquiry was launched to investigate the high-rate of dolphin deaths in the state.

Information that has now come to light shows dolphins from the Swan River had the highest level of PFCs in their system than any other in the country – 100 times higher than dolphins from Bunbury.

PFCs can be absorbed by marine life through general environmental exposure and also through the consumption of fish.

So far, the EPA is yet to find any detrimental effects of the PFCs on the dolphins, and further research is required to understand the impact the chemical compounds have on both marine life and humans who consume fish from the area.

Despite inconclusive findings, regulators from the US believe the weight of evidence supports the conclusion the chemicals are a hazard. In Australia, the EPA advises for the use of these chemicals to be limited to “essential use” only, as further studies are conducted into the potentially hazardous substance.

Let’s hope the state’s new government will act decisively and take steps to ensure that all is being done to prevent further contamination of our waterways and preserve the wildlife and natural environment that West Australians love and enjoy.

What is a hook lift bin? The term ‘hook lift bins’ derives from an attached hook that lifts the bins. This hook is attached at the rear end of the trucks making it easy.

Making a difference and protecting your bottom line…   Recent years has seen the world grow more conscious, on the level of the individual, of the environment; more aware of the impact of certain.