The Negative Effects of Marine Waste 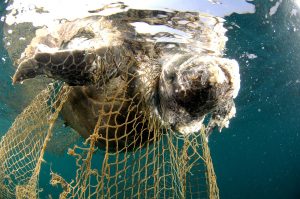 Despite Australian and International waste regulations that prohibit both individuals and businesses dumping rubbish in our oceans, approximately eight million metric tonnes of plastic enters the ocean from land each year.

That’s the equivalent of 16 plastic grocery bags (filled with plastic) for every metre of coastline around the entire world, excluding Antarctica. If we continue the way we’re going, by the year 2025, (which is just around the corner), we’ll be contributing enough waste to the ocean to cover 5% of the earth’s surface in a layer of cling wrap.

Marine waste is an enormous issue in Australia and around the world, which is why the correct disposal of waste, even if it’s just making sure you don’t litter, is more important that ever.

What is Marine Waste?

Waste enters the ocean in a number of ways. It could be from illegal dumping, or from general waste finding it’s way to the ocean when it’s not disposed of properly.

Marine debris is any manufactured or processed material, such as plastic bottles, fishing nets, and plastic bags that end up in the ocean.

Everything from cigarette butts to food packaging contributes to the level of waste in the ocean. These extreme levels in turn have a negative impact on marine life, and of course the overall pollution of the planet.

What Affect Does Debris in the Ocean Have on Marine Life?

Marine waste has the potential to cause injury or death to a range of marine species, including turtles and sharks, as well as birds or other land dwelling animals that frequent the ocean.

Common causes of injury or death is from entanglement, which can restrict their mobility, cause starvation, or even drowning. Fishing nets are particularly troublesome, as they are very difficult to escape from, trapping animals either on land, or causing them to drown or become prey in the water.

Ingestion is another major issue for sea life and birds. For instance, jellyfish are a normal source of food for turtles, but when there are plastic bags floating around, they often mistake these for jellyfish. Likewise, sea birds often mistake polystyrene balls for fish eggs. Whales are also known to eat plastic debris.

At Perth Bin Hire, we’re committed to the safe disposal of both residential and commercial waste.

With a keen focus on sustainable recycling and resource recovery, we’re committed to making good use of what was once considered waste. This means that we’re actively transforming items like sand, bricks, timber and plastic into new products, to reduce the amount of waste seeping into our oceans and filling up our landfills.

Our Perth-based headquarters have also invested in state-of-the-art screening and processing equipment, which has helped us achieve a 90% waste recovery rate.

Perth Bin Hire has provided waste removal services to the Rottnest Island Authority for more than ten years now. We provide the island with skip bins, bulk bins, compactors and transport vehicles in order to assist operators on the island to best manage and prepare the waste for transport back to the mainland. Once the waste arrives at the North Fremantle port via barge, Perth Bin Hire transports it to the appropriate recycling facility or landfill site. Check out the Rottnest Island Authority website to learn about Rottnest’s success with their waste management goals.

For more information on our sustainable waste management practices, contact us today!